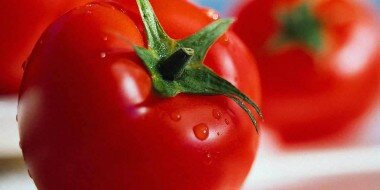 Originally named the “the Love Apple “ as it was thought to have aphrodisiacal powers. It  was once thought by some that it was the tomato and not the apple that Eve gave to Adam in the Garden of Eden.  But we just think  it is magical because it is one of those vegetables that you can use in nearly every meal. It is easy to cook, can be eaten raw, is very tasty and good for you.

They were probably first  grown in or around Mexico then made their way through Spain into Europe.  It was first mentioned in print in a recipe book in Naples in 1962.

Thankfully they then made their way to Australia where we grow many many varieties including: Beef Steak, Mighty Red, Grosse Lisse, Roma and Tiny Tims and one called Mortgage Lifter which was developed in the 1930. And you will find a lot of other varieties at your local green grocer.

No doubt you’ve heard the debate on tomatoes being a fruit or a vegetable. In 1893, US Supreme Court decided that the tomato was a vegetable.

Tomatoes contain a very powerful antioxidant   and some studies have shown, eating cooked Tomatoes will lower the chances of  men developing  prostate cancer,  they also have a lot of other significant health benefits.

Tomatoes can be picked “green” and left to ripen. They will ripen better at room temperature and if you store them stem down it will prolong their shelf life.

Even George and Ira Gershwin loved them enough to put them in a song “You say Tomayto  and I say Tomahto”.