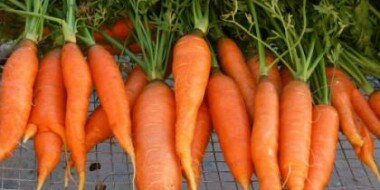 Carrots were the fifth most valuable vegetable crop in Australia behind potatoes, mushrooms, tomatoes and onions in 2004 (ABS). According to ABS, 302,560 tonnes of carrots were produced from about 7,200 hectares in Australia in 2004 with a farmgate value of $ 150 million.

In Australia, average yield is estimated at near 42 (t/ha) however good commercial operations often market over 60 t/ha and 80 to 90 t/ha yields are achievable.

Victoria (26 %) and Western Australia (21 %) together produce nearly half of Australia’s carrots. Tasmania (17%), New South Wales (14 %) and South Australia (14 %) and are the next biggest producers. The largest carrot producing farms are located on the Murray River east of Mildura in Victoria, and north of Perth in the west Gingin/Lancelin area of Western Australia.

In Australia prior to the 1920’s, carrots were cultivated on small holdings in vegetable growing areas close to cities. Planting, thinning, weeding, harvesting and washing were done by hand. As production expanded, horse-drawn ploughs and scarifiers were introduced for ground preparation. Tractors changed the face of vegetable production in the 1930’s and 40’s and the introduction of kerosene (“weed oil”) as a herbicide for carrots in the 1940’s revolutionised carrot production by replacing hand and mechanical weeding and allowing more extensive plantings. Cheaper, more convenient herbicides such as linuron replaced kerosene in the 1970’s. The introduction of mechanical harvesters in the early 1960’s saw individual growers planting up to 40 ha of carrots a year.

Osborne Park Champion (also known as Champion Red Core) was the main carrot variety grown in Australia for many years prior to the 1950s. During the 1950s, a range of varieties were grown, including Red Core Chantenay, Imperator, Top Weight and All Seasons (a selection of Top Weight). A selection of Osborne Park called Western Red established itself as the main variety Australia-wide by the 1970’s because of its high yield and quality. Western Red remained the mainstay of the carrot industry until the introduction of hybrid Imperator varieties from America and hybrid Nantes varieties from Europe in the early 1990’s.

2. Imperator varieties such as Red Hot and Cellobunch which produce pointed roots up to 350 mm long with medium width shoulders and taper. Several varieties grown in Australia such as Condor and Red Brigade are intermediate in shape between Imperator and Autumn King varieties. Still others such as Red Count and Red Sabre are intermediate in shape between Imperator and Nantes. Imperator varieties originated in the United States in the 1920s from crossing Chantenay and Nantes varieties.

3. Autumn King varieties which have wide-shouldered highly tapered pointed roots averaging 300 mm in length. The main representative of this group grown in Australia is Western Red. Majestic Red is a related variety with some Chantenay characteristics.

4. Chantenay varieties such as Royal Chantenay which are wide-shouldered and highly tapered with good internal colour. They produce short roots and are mainly used for processing. More recently the Japanese Kuroda type carrots have been grown, principally in Tasmania for export to Japan. During the late 1990’s.

Nantes varieties have become, by far, the most important type of carrot grown in Australia.

Carrots are commonly grown in rotation with other vegetable crops such as potatoes, lettuce, cauliflowers, broccoli and onions. They are grown on a wide range of soil types although sandy soils are favoured because of better root quality and ease of harvesting.

The growing period for a carrot crop is largely temperature dependent and ranges from 14 to 24 weeks depending on location and time of year. A bed system is used to grow carrots throughout Australia. Tractors with wheel centre spacings between 1.5 and 2.0 m straddle the beds. Three or four double rows of carrots are usually sown per bed with 50-80 mm between each row of the double row. A single row harvester then lifts one double row in a pass. Optimum plant densities for fresh carrot production range from 50 to 80 plants per square metre depending on yield potential of the crop. Carrot seed is small (averaging 800 seeds per gram) and oblong flat in shape with rough edges.

The best results are achieved by sowing carrot seed with precision air seeders. Because the seed is irregular in shape it is often pelleted or the technique of film coating which covers the seed with a thin polymer coating is used to make the seed easier to plant with a precision seeder. There are 80-100 seeds/g for pelleted seed. Just under 1 kilogram of raw seed or 7 kg of pelleted seed is required to plant a hectare of carrots. For precision sowing, seed needs to have a germination of over 90 per cent if target densities with consistent interplant spacings are to be achieved. Seed is sown shallow at about 5-10 mm and kept moist with irrigation if weather is hot and dry.

Time to emergence is temperature dependent and ranges from about 8 to 24 days under field conditions. At a constant temperature of 20 C carrots take 12 days to reach 80 % emergence. Cereal rye nursery crops are often sown a few days before carrots on sandy soils to prevent wind erosion damage to young carrot seedlings. The cereal rye is then killed with a grass specific herbicide. Weed control is by cultivation and and a range of pre- and post-emergent herbicides including linuron, trifluralin, prometryne and fluazifop-butyl. The soil fumigant metham sodium also effectively controls many weeds where used. Carrots are irrigated mainly using overhead sprinklers, centre-pivot and lateral move irrigators with water drawn from bores, rivers and dams.

Carrots grow best if water contains a total soluble salts concentration of less than 700 mg/L, while germination and establishment can be adversely affected if irrigation water contains more than 1,300 mg/L. Fertiliser requirements of carrots are low relative to many other vegetable crops. However for high yields moderate levels of fertility are required. A 60 t/ha carrot crop removes about 100 kg of nitrogen /ha. Carrots are susceptible to magnesium deficiency on acid soils and boron deficiency on sandy soils. Most crops are harvested by single row carrot harvesters which lift the carrots, cut off the leaves and and deliver the roots to trailers or bulk bins ready for washing. Larger operations use twin or multi-row harvesters. Some small areas of carrots are still harvested by hand. Carrots are washed immediately after harvest in rotary washers then size graded before coolstoring prior to packing. Once packed in plastic bags or lined cartons carrots can be stored for long periods at 1 C. Carrots develop bitter flavours if stored in open containers in mixed storage with ethylene producing fruit due to the production of iso-coumarin in the carrots.